Are you thinking about stepping up your cooking game with the help of your toaster oven? Then this article is perfect for you.

I took the time to find the best cookbooks you can use to perfect your cooking skills. Yes, there are countless recipes to be found online, but nothing can replace a good old cookbook.

Not only are the cookbooks packed with your favorite recipes, they often come in stylish, attractive hardcover editions. They could also look decorative on the kitchen counter or a bookshelf. This is a subtle way to show off your cooking skills without having to prove anything.

Actually searching for a rich cookbook can be difficult, but it’s definitely worth your time. Therefore, I spared you the hard part of the job and came up with a list of the best cookbooks for toaster ovens. I’ve bought and read through numerous cookbooks available on Amazon (not quite numerous really – there are around 20 toaster oven cookbooks available). Not all of them were worth the time and money, but the ones on this list certainly are.

The books that made it to the list righteously deserved their place. The criteria I’ve used to determine which cookbooks deserved a ranking was the general public’s opinion of them, and of course my personal liking. After all, the Toasty Guru should know everything toaster oven related, right?

Toaster Oven Perfection: A Smarter Way to Cook on a Smaller Scale

Coming from the award-winning publisher – America’s Test Kitchen, Toaster Oven Perfection is one of the best-rated cookbooks on Amazon. These authors are well known for their television shows, best-selling cookbooks, and online cooking schools. So if you wish to learn from the masters of cooking, this book is for you.

Editors Pick
Toaster Oven Perfection: A Smarter Way to Cook on a Smaller Scale
$16.67
Buy on Amazon
I earn a commission if you make a purchase, at no additional cost to you.

Every single recipe is a two-page masterpiece with high-quality photos that show you the end result (speak about motivation). That’s, of course, if you follow the steps carefully. However, that doesn’t come across as challenging as each recipe has detailed step-by-step instructions – so you’re guaranteed to succeed. America’s Test Kitchen cookbook is my absolute favorite when it comes to toaster oven cookbooks.

The only flaw – if I can call it a flaw – is the lack of diversity of the meals. A big part of the book only contains roasting recipes. While that’s what you mostly use the toaster oven for (so it makes sense), it would not have hurt to add versatile meals and dishes to the lineup.

Pop It in the Toaster Oven: From Entrees to Desserts

Published in 2002, this book managed to stick around for almost two decades. This only proves the quality and diversity of the recipes. Pop It in the Toaster Oven comes with excellent breakfast, lunch, dinner, and fish recipes – and a whole lot more. This is a real down-to-earth cookbook with recipes for the “average everyday family”.

Most Recipes
Pop It in the Toaster Oven: More Than 250 Healthy and Convenient Recipes
$14.99
Buy on Amazon
I earn a commission if you make a purchase, at no additional cost to you.

All of the ingredients used in the recipes can be easily found in your local supermarket. Putting those ingredients to work is also simple, as the instructions are clear and easy to follow. You will be the master of all recipes shown in this cookbook in no time.

One strange thing is that the writer uses margarine for some meals. Considering the dangers margarine carries, this is a bit off-putting. However, in its defense, the book was written in 2002, way before we knew of the threats of margarine and hydrogenated fats.

Toaster Oven Takeover: Easy and Delicious Recipes to Make in Your Toaster Oven

There is a lot of experience offered behind the kitchen counter by both authors of this book. Roxanne Wyss and Kathy Moore are involved in cooking on different and versatile levels. They do food blogging, food writing, and consulting. Oh yeah, they are also certified cooking instructors. It feels like they know a thing or two about cooking. 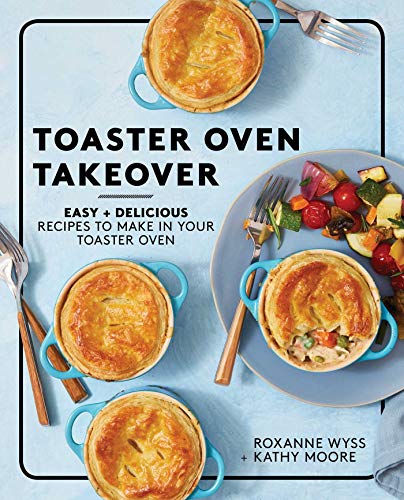 Buy on Amazon
I earn a commission if you make a purchase, at no additional cost to you.

Jokes aside, Toaster Oven Takeover is another great example of how a toaster oven cookbook should look like. It hosts a wide array of different recipes, each adjusted for beginner-level cooks. However, it might not be the best cookbook if you’re an experienced cook and already know a whole lot of toaster oven recipes.

It might be a bit awkward to read in the beginning. The weird part of this cookbook is that the recipe goes first, which is then followed by the ingredients list. This is not a standard format for a recipe, but it’s fine once you get used to it.

A unique cookbook on the list, which revolves only around convection cooking. It is a great addition to your recipe collection if you’re already familiar with most toaster oven recipes. Let’s be honest, convection cooking can sometimes be demanding, but with the Complete Convection Oven Cookbook, the difficulty is a thing of the past.

Convection Cooking
The Complete Convection Oven Cookbook: 75 Essential Recipes
$10.90
Buy on Amazon
I earn a commission if you make a purchase, at no additional cost to you.

However, this piece is a lot more than just a convection toaster oven cookbook. It contains a lot of chefs’ secrets, such as menu-planning tips and special techniques for calibrating oven temperature. It boasts 75 recipes, and all of them are American family favorites.

Even though they can be considered among the recipes loved by American households, the small number of recipes comes as a bit of a downside. Despite being delicious and thorough, this low number is disappointing – compared to the other cookbooks on the list.

In case you’re not familiar with convection cooking and ovens, make sure to read my complete guide on convection toaster ovens.

This is a go-to cookbook for everyday cooking. Most, if not all, ingredients can be found at your local market or a store near you. As the name suggests, it consists of 150 toaster oven recipes that offer a perfect serving for one, eventually two. It is an ideal cookbook for students or singles, who want to get that delicious toaster oven meal.

#1 For Everyday Cooking
150 Best Toaster Oven Recipes
$19.95
Buy on Amazon
I earn a commission if you make a purchase, at no additional cost to you.

Another great thing about this cookbook is that it uses both the metric system and US measurements. It’s quite convenient, no matter which measurement system you use – plus you get to learn the other one. It’s a win-win if you ask me.

The only flaw is that some of the recipes might leave a lot of dirty dishes. Between meal preparation and actual cooking, you will need to switch dishes – dirtying a few in the process. But what’s cooking without some work in the sink afterward, right?

No matter which cookbook you pick in the end – you just can’t go wrong. You might as well get multiple different ones as most recipes do not overlap. This way you’re guaranteed to improve your cooking skills by a long shot, while you also get a nice variety of recipes to be at your disposal.

Whether it’s for your own satisfaction or to impress your partner with some new-learned kitchen magic, these cookbooks got you covered. Let me know in the comments which cookbook you liked the most and which recipes you decided to try out. I am really interested to see how it went for you!