On June 3rd, 2015 a special YouTube channel uploaded three videos which have gone viral since. With this upload, they have sought to answer an age-old question: how much power can an athlete produce and is it enough to toast bread?

Simply put, the video is centered around Robert Förstemann who has to create enough power to operate a toaster.

Jump to The Video

What is The Toaster Challenge?

Have you ever wondered what it would take to power a toaster with human strength? Do you think it would be as simple as attaching a light bulb to a potato? Well, the answer is a bit more difficult than that. Actually, it’s a lot more difficult.

Imagine the strongest person you know. How long are they able to cycle on a bike at full strength? A minute? Two? Maybe less? Well, The Toaster Challenge decided to ask three exceptional athletes and put them to the test.

Robert Förstemann is a German olympic track cyclist, who at the time had massive leg muscles. His physique was top-notch as he is one of the best cyclists in the world.  In 2015, Förstemann weighed 95kgs, stood 195 cm tall, and was built of solid muscle. Just to put it into perspective, his muscular thighs measured at 74 cm (a bit over 29 inches).

He was tasked with one thing. Sit on a stationary bicycle and do what he does best: cycle.

The stationary bike was hooked onto the 700w toaster. The mechanism allowed the energy generated by the motion of cycling to be transmitted into the toaster and power it. The toaster was toasting as long as the cyclist was cycling. As soon as the bicycle stopped providing the power, the toaster popped the bread out.

Similar to The One in The Video
Basic White 2 Slot Toaster
$31.74

Can you power it? Your plug most certainly can so why not get yourself a neat modern-looking toaster just like the one in the video? 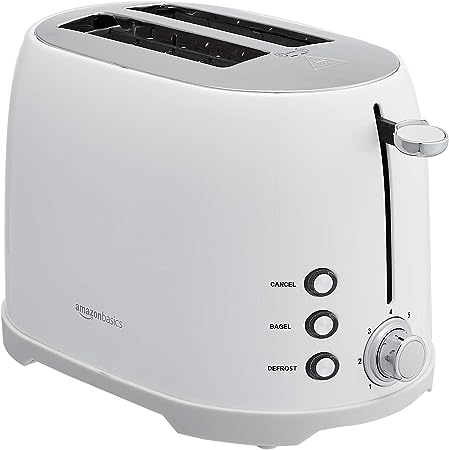 View on Amazon
I earn a commission if you make a purchase, at no additional cost to you.

A camera crew was there to capture the occasion in detail, while the process and the energy output was also measured.

Robert Förstemann started out strong, right off the bat generating around 700 W of energy. He was cycling at about 50 km/h speed. As the seconds rolled by, it was evident that Förstemann was starting to get tired. In the end, he cycled for 1:04 minutes and during that time he has managed to generate 0.021 kWh power.

This energy output was enough to lightly toast the bread. According to their calculations, 1 Robert, who let’s not forget is a world champion track cyclist, was enough to power the toaster for a bit over a minute for this result. However, if you prefer your toasts to be darker, sadly, you will need to stay with everyday electricity to make you toast.

After Robert Förstemann’s attempt, two more videos were uploaded to The Toaster Challenge Youtube channel on the same day. While both athletes did an astounding job, unfortunately, their attempts were less successful. Lassi Karonen managed to generate 0.01 kWh of power, while Ida Ingemarsdotter got 0.0058 kWh of energy.

Can an Olympic Cyclist Power a Toaster?

Yes, an Olympic cyclist can power a toaster, but it takes a lot of work. Robert Förstemann battled a toaster in 2015 and he managed to lightly toast a single piece of bread. By cycling, he generated 0,021 kWh power which was enough to make lightly toasted bread. Others have tried as well, with lesser results.

How about you learn a few more things about toasters while you’re on the topic? Hop over and check out amazing toaster facts – you won’t regret it!